ExpressWrite: Say it the Right Way

Written by Jeffrey Gibbons : Posted on October 6, 2015 : No Comments

Expresswrite offers copywriting services resource for companies across the country. We provide clear and compelling writing of all kinds and in styles customized to fit to individual businesses and crafted to emphasize their unique attributes. Expresswrite is a one-stop shop for: 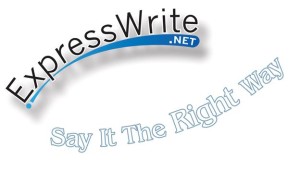 At Expresswrite words have meaning. Writing with intent is our specialty and that is why companies rely on us. Words that serve no purpose or do not contribute to the core message waste time and money. Companies frequently bury their most critical message beneath a jumble of unimportant minutia or jargon. We elicit what is essential and place that information where it is most likely to be seen quickly and read easily.

All forms of advertising, whether web or print, serve as vital points of contact with potential customers who are presented with a plethora of marketplace choices. Our job is to capture their attention and pique their interest just enough that they are willing to spend a bit of their precious time exploring our clients’ offerings.

Expresswrite takes the time to research our clients and understand their professional needs and goals. Our writing can be used to inform or inspire the reader, but in all cases it should motivate him or her to take concrete action. Credibility and trust can be quickly eroded by poor grammar and convoluted sentence structure. There are five essential ingredients to all our writing services.

Visit our website at https://www.expresswrite.net/ . When you need to say it the right way, call Expresswrite.

Written by Jeffrey Gibbons : Posted on October 4, 2015 : No Comments

An old black and white film of Kennywood Park shows some of their early thrill rides. One is a giant spinner, like a record turntable but large enough for a couple dozen people to sit on. It is completely smooth with nothing to hold onto except for the spindle in the very center. I guess the idea is to try to stay on as long as possible as it begins to spin faster and faster.

The ride at Kennywood was built in a time before seatbelts in cars, an era when kids would ride their bikes and scooters up and down freshly cindered streets with no helmets or knee pads or worried parents hovering over every wobble or tumble. Parents cared of course. They loved their children. Our parents loved us. They patched up our scrapes and cuts, held cold wash cloths to our heads and dried our tears. They let us find out that some things hurt when you do them. Sometimes you fall down. Sometimes you fall off and it hurts. The person who designed the spinner at Kennywood must have been a mom or dad who looked at their kids one day and thought it would be such fun to build them a giant smooth spinning disc to ride on with nothing to hold onto except that one post in the center. As it began to spin faster and faster the children would slide off the slick surface into the waiting arms of moms and dads in a time when moms and dads did wait patiently at the edges with cold wash clothes and band-aids and tincture of iodine. The science of centrifugal force causes objects to fly away from the center, towards whomever or whatever is on the edges, on the outside. The designer must have known that centrifuges also separate and sort things out. Centrifuges separate red blood cells from white blood cells, solids from liquids, Uranium 238 from Uranium 235. They can be used to simulate weightlessness for training astronauts and simulating extreme maneuvers for fighter pilots. Or an amusement ride for kids.

A group of college kids is at the amusement park dressed as though they have just come from a dance, boys in suits and ties, girls in fluffy prom dresses with lots of mysterious and impenetrable layers of chiffon. At dances they have cards with numbers followed by blank spaces for each of the dances and you have to fill in a girl’s name in every space. You have to. You don’t want to have a blank space, no partner for a dance because then you have to stand alone on the side and not put your hands in your pockets while everyone else dances and they all can see you don’t have a partner. Maybe you can’t get a partner. Maybe all the girls say “no.” And the hard part for the girls there are always more girls than boys. They try to keep the numbers equal so no one gets left out, so everyone has a partner but it never works out that way. Sometimes even when you start out with pairs, like socks, you still end up with one or two that don’t match any others so you just tuck them in the side of the drawer and hope someday the mate will show up. It rarely does, but you don’t want to throw it away. You wait and hope. So, you don’t want to be the one standing on the side with nothing to hold onto but your dance card with a blank space on it.

Some of the college kids, mostly the girls in their puffy formal gowns, sit along the outer edge of the spinner, ready to jump off when it begins to rotate. When it does, they land lightly on their feet, dismounting with pointed toe as though from a royal carriage, smiling, smoothing their dresses, looking back at those still sitting on the spinning disc.  It is enough for them to say they had ridden the spinner, had a little thrill, not too risky, not too fast. They know it is good to land on your feet even if the ride is short. They know it is better to be safe than sorry. Falling down hurts. Others sit further up the disc, mostly the boys. A few adventurous girls peer out above little chiffon mounds with legs stretched out in front, trying to stay balanced while holding down their dresses so boys can’t see their panties. Boys are always trying to see their panties, another thrill of the ride for the boys. As the spinner winds up, they start to slide. Not straight the way their feet are pointed but sideways too. Centrifugal force is like that. It’s not straight ahead. It bends. Engineers know that. Scientists know that. And so they fall sideways and slide out towards the edge, some laughing, arms and legs flying, some holding hands, some holding dresses. They come off the ride much faster and with less grace, stumbling to catch their footing. Sometimes an outstretched hand steadies them, sometimes not. Sometimes they just bump into the people on the edges. One or two go to their knees, but get up right away. They smile and laugh with the outsiders assuring each other that it’s ok. Yeah, that was fun. Gee whiz! Suits are straightened, dresses patted back into place as they glance back at the remaining riders.

The platter spins even faster so only a few are still left near the center. A boy and girl cling to the center post. But the designer made this ride so you can’t hold on even when you climb all the way to the center. It won’t stop spinning until the ride is over and no one is left, so it just spins faster and faster. You can climb to the center or near the center but once you start to slip there is no going back. Flail and claw and kick. A boy reaches out to rescue a girl and she just drags him outward with her, both of them tumbling to the edge. The longer you hold on, the faster it goes and the harder you slam into those gathered along the rim. The higher you climb and the further you slide, the more centrifugal force. It’s just science. It’s just physics, the way the universe works. So, now the kids are coming off the spinner fast, like the fighter pilots must feel when their airplanes loop in the sky, flying out with great force and speed. But they don’t land on their feet anymore. They land roughly, awkwardly, falling. People try to catch them but it’s too much. Their faces look surprised, eyes wide. They had to know it would come to this. Didn’t they watch what happened to others before them? Why are they surprised? No one stays on the spinner till the end of the ride. The designer made it like that.

The last one on the spinner is a young man, holding on with all his strength as though he had to prove something, maybe to himself, maybe to his friends. Both hands wrapped around the center post. He glances over his shoulder and sees he’s the only one left. Maybe he thinks about a blank space on his dance card. Maybe is remembering gripping the handlebars with cinders flying out from beneath the wheels of his bicycle.  His jaw seems to relax a bit, perhaps a trace of a smile in the second before he lets go. He slides faster than all the others. After all the others. Sorted out from all the others. Somehow he rolls his body with the centrifugal force, sensing its bends and using it to keep his feet pointed towards the edge so when he flies off the spinner he is already running fast, his body pitched forward like a sprinter and he runs through an opening in the crowd.  The designer must have known there would be people like him, people who would try to hold onto the center. People who could feel the subtle twists within the science and the power of centrifugal force and sense what it can do, how it can move things apart or push them together so hard that you can’t hold on until the end of the ride. He must have known there are people who can keep their feet pointed outward and hold on until they are all alone and, only then, choose to let go.